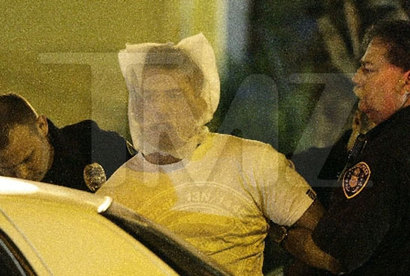 
What's up guys!? I'm gonna do a weekly blog for this year while I'm locked up. Just want to keep y'all posted and give you some insight on what it's like here for me. When I first got here I was told I was gonna be kept in segregation to pretect myself since I'm a "celebrity." I told them NO WAY! 23 hours a day lockdown? FUCK THAT! So they stuck me in the "mainline." They classified me a 5 on a scale 1-6 so I'm with the big dogs. Everyone here has been to prison. Few guys in my unit are murderers waiting to be shipped out to prison for life. Funny, kinda odd, but they are the most friendly of the bunch... Most intelligent too. Hardest thing about this place is finding people you can have a decent conversation with.


So when you first get here you learn the rules, jail politics. You got the Whites, the Mexicans, and the Blacks + others. Whites and Mex share tables for recreation but you only eat show at your designated race's table. You never sit at the Blacks table and vice-versa, but you can talk to them here in County Jail. If a Mex or White fights a Black, all the Mex and Whites are required to jump in. One on one fights are only allowed against your own race and take place in an empty cell. I think it's dumb. I'm not trying to fight anyone and can care less abotu who fights who. I hope no big rumbles happen... I can't afford more trouble. Buttt if you don't help, you get jumped afterwards. Maybe I'll just throw body shots and leg kicks so I don't hurt anyone... Anyway so far all is well.


I'm bored a lot, just been reading and working out to stay busy. All the guys here are cool to me, I get a lot of questions about fighting. Seems everyone wants to learn some "moves." I wish we could train here, would make it way more fun... lol. So yeah, anyway I don't see anyone fucking with ME... Only way BS goes down is if I get drug into someone elses lame drama. Well that is that! Week 1 in a nut shell. Look forward to keeping you guys updated. Can't wait to get out and fight for all my fans again! Can't wait to open my gym in Austin! Thanks for standing by me. If you go to sdsheriff.net you can e-mail me. Booking # 10754342 Jon Koppenhaver.


"First off I wanna thank all of you that have been writing to me. I have been getting mail from as far away as Russia and Australia! It's neat to know my career has brought attention to me from so far away.


I had my first scare this week. I was laying in my bunk when a neighbors "fishing line" hit my door and got stuck beneath it. I got up to free it (half tube toothpaste attached to string), and it broke, leaving it with me. When I looked into the tube it was filled with what I'm pretty sure was drugs. The lights were dim and I just assumed my initial presumption was correct. I kinda panicked and just kept picturing guards coming into my cell and busting me. I wondered how many extra years I'd get... Anyway, I hid it in my trash and waited 'til breakfast with crossed fingers. As soon as our doors "popped" in the AM, I went to the inmate whom the line belonged to and told him "It's in my trash, go grab it." He said, "It's cool, I have more." I told him that I didn't wanna get busted and I don't do drugs anyway, and he started laughing. I guess they use crumbled soap bars to weigh down the tubes of toothpaste... LOL! Fuckin scared the shit outta me for NO REASON!!


What else... Oh shit. I tried some prund! Basically jail moonshine, they make it from fermented fruit, sugar, and water. It takes like 5 days and tastes like some fucked up wine but hey =)


I had a very good conversation with a Somalia born Muslim named "50." I think he's a "blood" anyway, he just got sentenced to life for some murders he was accused of. Anyway, he's actually a very intelligent guy. Real nice too. I feel bad for this guy, real bad. I get to meet the man and see the pictures of his children. He's a human, not a monster. He was telling me how the media portrayed his case and utilized our nations preconceived notions and prejudice to convict him instead of the facts. They painted him as a "Somalian" and a "Muslim" even though his family immigrated here to escape all that and are proud American citizens now. Thinking on it, he's right. I myself would judge him on it, I know my SEAL friends would too. Shit, I think just a few months ago I tweeted something about how I hated "nasty Muslims." I never even had a clue as to what they believe until he explained it to me. It really opened my eyes. I think all Americans born and raised here are just as brain washed as me and my friends. We all need to question what we hear in the media and what our government tries to program us with. We need to stay open minded.


New Subject... Still smooth sailing in regards to trouble. I think being a pro fighter/athlete is really turning out to be a plus in here. The guards are courteous to me and I get a lot of respect from inmates. They all really would rather just ask me shit and everyone keeps saying they're gonna go to Undisputed when they get out and I hope they do. We can always need more members and these guys could use a positive hobby. Oh shit, and I almost forgot..


We got some weird old Mexican dude here and he says he's an Army Ranger Sergeant out of Texas who was sent to CA to investigate the police here and their involvement in the 911 Terrorist Attack and when he tried to arrest a cop, the other cops jumped him and put him here... Too bad he's like 55, fat, and looks like Mr. Magoo!! HAHA!! Crazy fucker! I think he's just scared here so he made that story up to sound bad ass... Anyway, just thought I'd share that funny tid bit."
Click to expand...